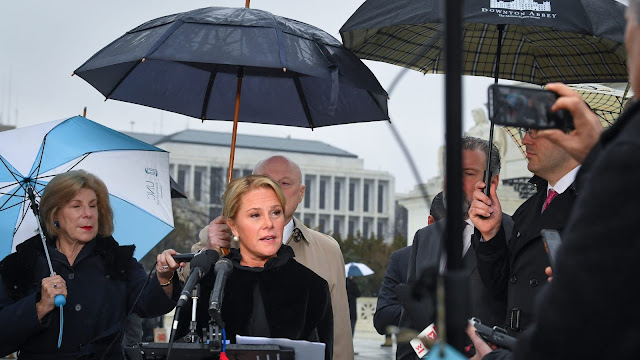 Yesterday, the United States Supreme Court overturned the criminal convictions of Bridget Anne Kelly and William Baroni for crimes relating to a 2013 incident involving allegedly politically motivated traffic chaos at a major bridge access from New Jersey to Manhattan. Kelly, then-New Jersey Governor Chris Christie's deputy chief of staff, and Baroni, then the deputy executive director of the Port Authority of New York and New Jersey, were both previously convicted of fraud for their actions.

The case revolved around Kelly and Baroni's convictions following the 2013 "Bridgegate scandal" in Fort Lee, New Jersey. In September 2013, for four days, traffic "ground to a halt" — as the Supreme Court decision put it — at part of the George Washington Bridge, an entryway into Manhattan, administered by the Port Authority. For decades, three of the twelve access lanes to the bridge had been reserved during morning rush hour for commuters coming from the streets of Fort Lee.

But on these four days only a single lane was set aside. The public officials who ordered that change claimed they were reducing the number of dedicated lanes to conduct a traffic study. The Supreme Court decision stated they did so for a political reason: to punish the mayor of Fort Lee for refusing to support the New Jersey Governor’s reelection bid.

The Supreme Court sought to determine whether Kelly and Baroni's actions qualified as property fraud under federal statutes. The unanimous court decided their actions did not qualify, reversing the convictions and remanding the case back to the Court of Appeals for the Third Circuit.

Writing for the Court, Supreme Court Justice Elena Kagan declared in the majority opinion, "not every corrupt act by state or local officials is a federal crime. Because the scheme here did not aim to obtain money or property, Baroni and Kelly could not have violated the federal-program fraud or wire fraud laws."
Hot-posts News