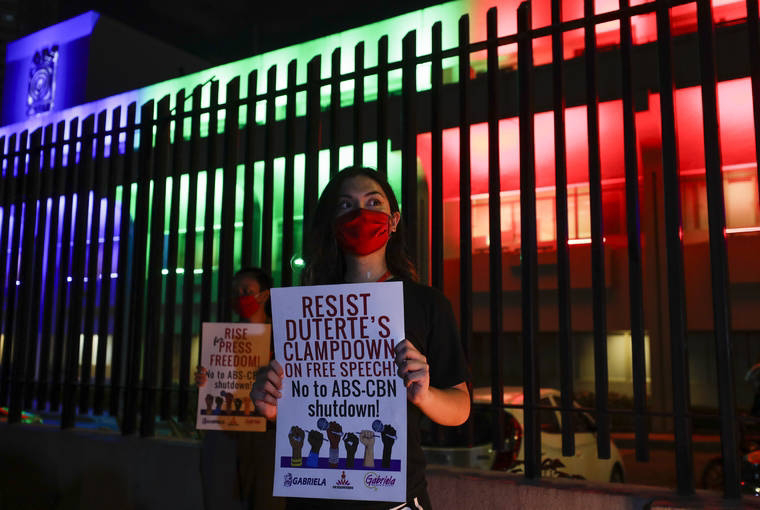 Following the expiry of broadcast corporation ABS-CBN's legislative franchise, the Philippine government issued a cease and desist order dated yesterday, forcing the shut-down of broadcasting operations by the company. Later in the evening, the network signed off and went off-air. The last time the Philippine government ordered the network to shut down was during the martial law imposed by former Philippine President Ferdinand Marcos back in 1972.
Republic Act No. 3846, also known as the "Radio Control Law", states "no person, firm, company, association, or corporation shall construct, install, establish, or operate a radio transmitting station, or radio receiving station used for commercial purposes, or a radio broadcasting station, without having first obtained a franchise therefor from the Congress of the Philippines." Since ABS-CBN's legislative franchise, Republic Act No. 7966, on Monday, the network no longer had a valid franchise to continue airing their programs. The National Telecommunications Commission (NTC) issued a cease and desist order to the network yesterday, and in compliance, the network signed off that night.

The network tried to renew their franchise as early as July 2019, but all eleven of the legislative bills filed have been stuck in Congress. The franchise of ABS-CBN expired on Monday, the same day Congress reconvened after their Lenten Break, which began on March 13. Though the NTC is allowed to provide the network a provisional license while its application to the Congress is still being decided upon, the commission refused to provide the network with said license. A number of Senators condemned the act of the NTC, citing the move as a "grave abuse of governmental power" and "contrary to law".

ABS-CBN Corporation is the largest television and radio broadcasting company in the Philippines with over 42 television stations, 10 digital channels, and 18 FM and five AM radio stations, and has been broadcasting for over 65 years. Philippine President Rodrigo Duterte threatened the network's franchise renewal before, after the network didn't carry some of his campaign commercials, which they've said was due to a lack of airtime, and he accused the network of "swindling". Solicitor General Jose Calida filed a quo warranto petition on February 10, accusing the network of violating its franchise. After a Senate hearing was conducted on February 24, the Senate did not find the network had breached laws, nor its franchise terms. ABS-CBN CEO Carlo Katigbak said refunds for Duterte's unaired political ads were offered, of which some were not accepted by his campaign. Katigbak apologized to Duterte during the hearing, which the President accepted according to a statement by the Presidential Spokesperson Harry Roque.

The network's news channel, ABS-CBN News Channel, is still on air, as the network claims the cease and desist order did not cover their news channel's franchise.
Hot-posts News