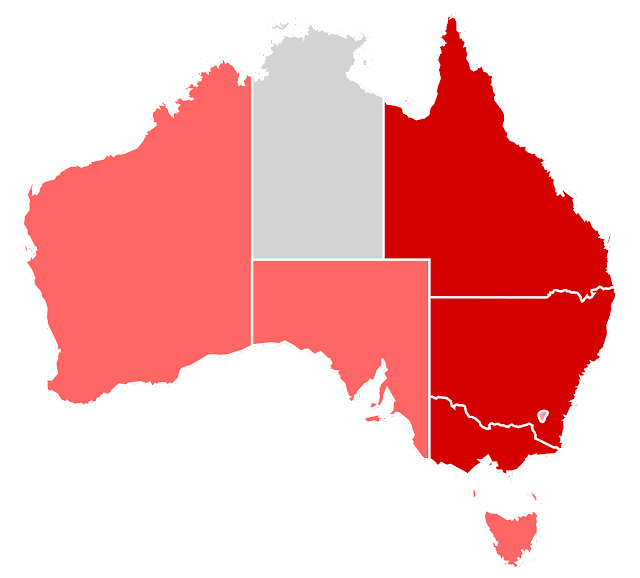 This article documents the impacts of the 2019–20 coronavirus pandemic in Australia, and may not include all the contemporary major responses and measures. As of 17 March 2020, 463 cases have been reported in the country with most of the cases being in New South Wales with 209. The first case to be recorded in Australia was on the 25 January 2020 in the state of Victoria when a man travelling back from Wuhan was tested positive for the Coronavirus.

The start of March saw Australia's first death to the coronavirus with the person being a 78 year old Perth man who was a passenger of the Diamond Princess as he was being treated at the Sir Charles Gairdner Hospital in Nedlands, Western Australia. During the rest of day, three more cases was confirmed with two being in NSW and one in Victoria with all of the cases coming from Iran. The NSW cases was an man in his 40s and a woman in her 50s who were on two different flights before they had developed symptoms. The Victorian case was a woman in her 30s who had arrived into Melbourne on 27 February after catching a plane which travelled through Kuala Lumpur and Bali.  The Victorian Health Minister, Jenny Mikakos urged anyone who was on the same flight to ring the helpline while the state's chief health officer, Brett Sutton, said passengers who were sitting in the same row or the two rows either side of the woman confirmed to have COVID-19 would be asked to undergo quarantine.
On 2 March, the nation reported four new cases, two of which were the first cases of community transmission of the virus. These two cases were acquired whilst in Australia whereas all other previous cases up to that date were imported from another country. The two cases being in NSW with it being a family member of another close relative who got the virus with the other one being a health care worker in Western Sydney. The two other cases came from Iran with a man in his 30s who came back via Malaysia on the 29 February and was isolated at the local hospitial. The other case being a 40-year-old man from Launceston who came back on the 29 February from a flight which left Melbourne and landed in Launceston on the same day. He was treated at the Launceston General Hospital as he became the first Coronavirus case in Tasmania.

On 3 March, eight more cases were confirmed to be positive in Australia, in Queensland there was two cases with one being an international student travelled back from Dubai on 23 February before feeling unwell two days later. The other be a 20-year-old man from China who was being treated at the Royal Brisbane and Women's Hospital. NSW Health confirmed six further cases in the state in the age-ranges between 30s to their 60s with only one case being in the country with it being a 51-year-old aged care worker at the Dorothy Henderson Lodge aged care nursing home in Macquarie Park run by BaptistCare.

The following day, saw the nation's second death from the virus with a 95-year-old female dying at a Sydney aged-care facility who had tested positive with the disease. She was one of six cases that was recorded in New South Wales with ages varying between 27 and 95 years old. This was after an earlier positive case was reported at the Dorothy Henderson Lodge. QLD Health recorded its eleventh confirmed case with a 26-year-old male from Logan arriving back from Iran on 26 February and had been unwell prior to travelling. He presented to Princess Alexandra Hospital on 2 March where he was quarantined. Three more cases appeared in Victoria and South Australia with two of the cases being from Iran with the other one recently travelled through Europe which included Italy.

On 5 March, two further cases were announced in South Australia. The 6th case in SA and the 52nd case in the country was an 8-month-old baby boy. His mother was SA's 4th confirmed case. They had travelled together from Iran. The 7th case in SA and the 53rd case in the country was a 58-year-old male, identified as Brett Dean. Dean is a composer and had recently travelled from Taiwan.  WA also recorded its third case, becoming the 54th case in the country. A female in her 30s had recently travelled from Iceland and the UK via Dubai, arriving on 3 March and became symptomatic the following day. She was stable and recovering in self-isolation at home.

Also that same day, NSW Health announced a further three cases, bringing the NSW total to 25 cases and the national total to 57 cases. They included a 94-year-old patient at Dorothy Henderson Lodge with no recent history of travel, a 52-year-old male who was a Goulburn resident that had travelled to Darwin and was tested after finding out he was a close contact of an earlier confirmed case, and a 16-year-old male Year 11 student at Epping Boys High School in the north of Sydney.

Later that day, Qld recorded its 12th and 13th cases in the state. "An 81-year-old man who returned recently from Thailand became the 12th confirmed COVID-19 case and he remained in a stable condition in the Sunshine Coast University Hospital on Thursday. A 29-year-old woman from Brisbane, who recently travelled from London to Brisbane with a short stopover in Singapore, was identified as case number 13. She is now well and in isolation." These cases became the 58th and 59th cases in the country, respectively.

On 6 March, Epping Boys High School was closed for one day, as per NSW Health advice, in an effort to trace contacts and contain the virus. NSW Health also confirmed three new cases bringing the total to 28 in the state. The 26th and 27th cases were a 24-year-old female and a 21-year-old male who were both staff members at Dorothy Henderson Lodge with no recent history of travel. The 28th case was an 18-year-old female who was a close contact of another recently confirmed case in Western Sydney. These cases became the 60th, 61st and 62nd cases in the country, respectively. Qld also recorded its 14th case in the state and the 63rd in the country, a 28-year-old male who recently travelled from Iran and was taken to Princess Alexandra Hospital.

On 7 March, Victorian Health Minister Jenny Mikakos confirmed during a press conference that a doctor in Victoria had tested positive for COVID-19, becoming the 11th case in the state. The doctor in his 70s had returned to Australia from the United States on 29 February. From 2 March to 6 March, the doctor had consulted approximately 70 patients at The Toorak Clinic in Melbourne and two patients at an aged-care facility. The clinic was closed over the weekend and patients were contacted to self-isolate. Health officials sought to notify passengers on the doctor's flights. The doctor believed he only had a mild cold and was fit to return to work, hitting back at the minister for her comments. He was the 64th case in the country.

On the same day, NSW Health confirmed a further six cases, taking the total to 34 in the state and 70 in the country. The cases involved a male in his 20s, a male in his 40s, a male in his 50s, and two females in their 40s who were all family members or close contacts of an earlier confirmed case, and a male in his 70s who had travelled from Italy via Doha on 1 March. Tasmania's Public Health department also recorded its second case in the state, the 71st case in the country. A male Hobart resident in his 20s returned from Nepal via Singapore on 26 February and experienced cold-like symptoms the following day. On 6 March he was asked to self-isolate by authorities whilst awaiting his test results. He ignored this advice and attended his casual work shift on 7 March at the Hotel Grand Chancellor. Shortly after, his results returned positive for the virus.