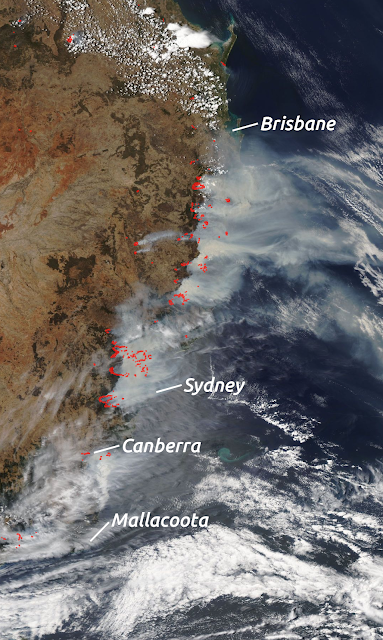 Since June 2019, there have been many large bushfires burning across Australia, especially in the south east where a state of emergency was declared in New South Wales. As of 14 January 2020, fires this season[a] have burnt an estimated 18.6 million hectares (46 million acres; 186,000 square kilometres; 72,000 square miles), destroyed over 5,900 buildings (including approximately 2,683 homes) and killed at least 34 people. An estimated one billion animals were also killed and some endangered species may be driven to extinction.

Whereas these bushfires are regarded by the NSW Rural Fire Service as the worst bushfire season in memory for that state, the 1974 bushfires were nationally much larger[b] consuming 117 million hectares (290 million acres; 1,170,000 square kilometres; 450,000 square miles). However, due to their lower intensity and remote location, the 1974 fires caused around $5 million (about $36.5 million in 2020  in damages. In December 2019 the New South Wales Government declared a state of emergency after record-breaking temperatures and prolonged drought exacerbated the bushfires.

From September 2019 fires heavily impacted various regions of the state of New South Wales, such as the North Coast, Mid North Coast, the Hunter Region, the Hawkesbury and the Wollondilly in Sydney's far west, the Blue Mountains, Illawarra and the South Coast, Riverina and Snowy Mountains with more than 100 fires burnt across the state. In eastern and north-eastern Victoria large areas of forest burnt out of control for four weeks before the fires emerged from the forests in late December, taking lives, threatening many towns and isolating Corryong and Mallacoota. A state of disaster was declared for East Gippsland. Significant fires occurred in the Adelaide Hills and Kangaroo Island in South Australia. Moderately affected areas were south-eastern Queensland and areas of south-western Western Australia, with a few areas in Tasmania and the ACT being mildly impacted.

Reinforcements from all over Australia were called in to assist fighting the fires and relieve exhausted local crews in New South Wales. On 11 November it was reported that the Victorian Country Fire Authority (CFA) was sending in a large contingent of up to 300 firefighters and support staff to assist.  By mid-November 2019, more than 100 firefighters were sent from Western Australia. Contingents were also sent from South Australia and the Australian Capital Territory. On 12 November, the Australian Government announced that the Australian Defence Force would provide air support to the firefighting effort, as well as prepare to provide manpower and logistical support. Firefighters and equipment from New Zealand, Singapore, Canada and the United States, among others, helped fight the fires, especially in New South Wales.

On 12 November 2019, catastrophic fire danger was declared in the Greater Sydney region for the first time since the introduction of this level in 2009 and a total fire ban was in place for seven regions, including Greater Sydney. The Illawarra and Greater Hunter areas also experienced catastrophic fire dangers, and so did other parts of the state, including the already fire ravaged parts of northern New South Wales. The political ramifications of the fire season have been significant. A decision by the New South Wales Government to cut funding to fire services based on budget estimates, as well as a holiday taken by Australian Prime Minister Scott Morrison, during a period in which two volunteer firefighters died, and his perceived apathy towards the situation, resulted in controversy.


As of 14 January 2020, 18.626 million hectares (46.03 million acres) was burnt or is burning across all Australian states and territories. Ecologists from The University of Sydney estimated 480 million mammals, birds, and reptiles were lost since September with concerns entire species of plants and animals may have been wiped out by bushfire, later expanded to more than a billion.

Since the start of the season, the ongoing bushfires have destroyed 2,176 homes, as well as 48 facilities and more than 2,000 outbuildings in New South Wales alone. Twenty-five people were confirmed to have been killed in New South Wales since October. The latest fatality was reported on 23 January 2020 following the death of a man near Moruya.

In New South Wales, the fires had burnt through more land than any other blazes in the past 25 years, in addition to being the state's worst bushfire season on record. NSW also experienced the longest continuously burning bushfire complex in Australia's history, having burnt more than 4 million hectares (9,900,000 acres), with 70-metre-high (230 ft) flames being reported. In comparison, the 2018 California wildfires consumed 800,000 hectares (2,000,000 acres) and the 2019 Amazon rainforest wildfires burnt 900,000 hectares (2,200,000 acres) of land.