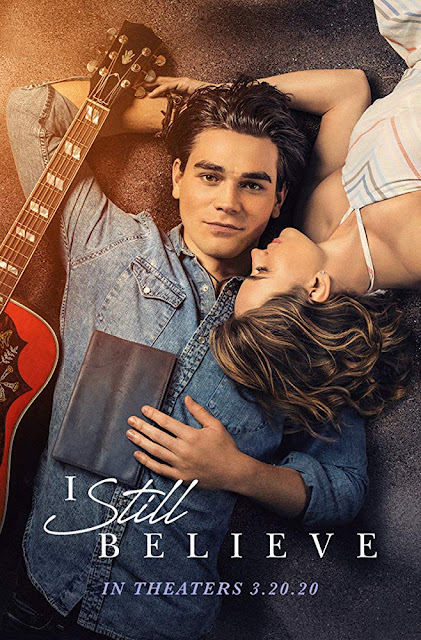 I Still Believe is an upcoming Christian biographical drama film directed by the Erwin Brothers and based on the life of singer-songwriter Jeremy Camp and his first wife, Melissa Lynn Henning-Camp, who was diagnosed with ovarian cancer shortly before they married. Camp's song "I Still Believe" is the film's namesake. The film will be theatrically released on March 20, 2020, by Lionsgate.

Plot: Based on Camp's memoir of the same title, it focuses on Camp's romance with his first wife, Melissa, whom he married in October 2000 despite knowing she was dying. The couple were informed after their honeymoon that Melissa's cancer had spread. She died in February 2001, four-and-a-half months after they married. It dramatizes Camp's teenage years, his rise as a well-known singer, and meeting his second wife, Adrienne.

Production: The film is the first project of a deal struck between the Erwin Brothers and Lionsgate after the success of their film I Can Only Imagine. It is also the first film released by Kingdom Studios, a production company founded by the Erwin Brothers, Kevin Downes, and Tony Young.

KJ Apa was announced as the star of the film, playing Camp, and Gary Sinise was announced for the role of Camp's father, at Comicon in April 2019. That same month it was announced that Britt Robertson would co-star as Melissa Camp, joined by Shania Twain as Camp's mother, Melissa Roxburgh as Melissa's sister, and Nathan Parsons as a mutual friend.

Apa, who will do his own singing for the film, said he was drawn to the story because "[t]heir love is seriously put to the test in this movie," adding, "it's about journeying through your biggest fears and disappointments and coming out still believing. I believe that anyone, everyone can relate to this film because it's a story about love, loss, and hope." Filming began in the Mobile, Alabama area in May 2019. The first trailer was released in August 2019.