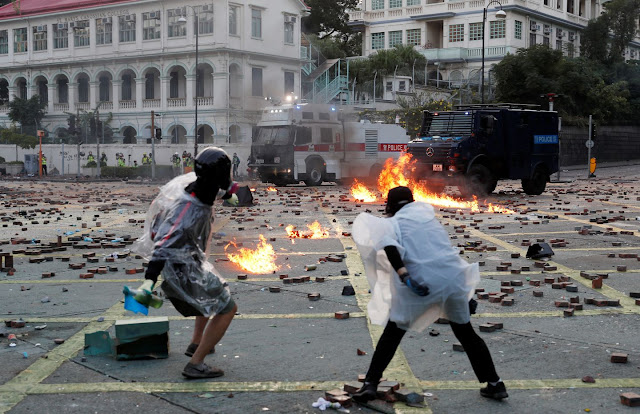 Deaths and intensification: The Hong Kong Police told the press that the protesters are using university campuses as "weapons factories" where they are deploying various improvised offensive weapons. On 17 November, confrontation between protesters and police occurred near the Hong Kong Polytechnic University. Police fired tear gas and shot blue-dye water to disperse protesters, while a media liaison police was hit by an arrow from protesters. Police besieged the university, stating on 17 November that anyone leaving the university would be arrested unless they were journalists. Among those arrested while leaving were many volunteer medics.

After police threatened to use live ammunition if protesters did not leave, on 18 November the university's president said that police had agreed to temporarily stop using force, as he urged protesters to leave peacefully and surrender. However, protesters who attempted to leave the university that day were met with tear gas and rubber bullets from police, leading them to return to the university.
Protesters carried out a "Blossom Everywhere" campaign during the weekdays of 11 to 15 November, including roadblocks and train service disruptions across the city, as well as the occupation of several universities. This has sparked the closures of shopping centres and schools. In response to Alex Chow's death, protesters planned a city-wide strike starting from 11 November, and disrupted transport and traffic in the morning. That morning, police fired live rounds in Sai Wan Ho in eastern Hong Kong Island, in addition to tear gas rounds and pepper spray; a 21-year-old man was wounded after being shot by police, and was sent to hospital. The police defended the shooting and alleged that the protester was trying to grab his gun. In Kwai Chung, a traffic police officer rammed his motorcycle into a crowd of protesters, resulting in 2 injuries.

In addition, a middle-aged man was doused with flammable liquid and set on fire by a protester when he confronted the protesters inside Ma On Shan station. For the first time, during a standoff on 11 November, police shot numerous rounds of tear gas, sponge grenades and rubber bullets into the campuses of universities. The students from Chinese University of Hong Kong confronted the police for two consecutive days; clashes occurred at the university campus on 12 November, with police firing tear gas and projectiles into the campus, while protesters put up road blocks and threw bricks and petrol bombs. On 11 and 12 November, there were also rare weekday protests in Hong Kong's central business district, including flash mobs during lunchtime. The clashes between police and protesters resulted in businesses closing early. On 14 November, an elderly man died from a head injury during a confrontation between protesters and local government supporters in Sheung Shui.
Business Hot-posts News
Location: Гонконг