Posted by Sargis on October 01, 2019
For the first time in the sixteen weeks of protests in Hong Kong, police fired and landed a live round on a protester yesterday. The victim, eighteen-years-old and a high school student, was taken to the hospital for emergency surgery and is reported to be in critical condition. The shooting took place in the Tsuen Wan district. Although the police have used force against protesters before, this is the first report of a protester being shot with live ammunition.

Footage from the City University Student Union showed a group of protesters throwing things as they ran away from police. The video showed a single police officer surrounded by protesters; he then drew his pistol, pointed it, and shot at one person. This person fell to the ground as the other protesters ran away.
Police Senior Superintendent Yolanda Yu Hoi-kwan said at a press conference: "The police officers' lives were seriously threatened. To save his own and his colleagues' lives, he fired a live shot at the attacker." Amnesty International has called for an investigation into the shooting.

In other parts of the city, the police used water canons and tear gas against protesters. Some protesters responded by throwing things, including Molotov cocktails, but others only shielded themselves with umbrellas and did not return the attack. Violence continued through the evening and the news network RTHK withdrew its reporters from the field after one of them was injured in the face. More than 66 people were injured yesterday according to health officials, ranging in age from eleven to 75.
Today is the 70th anniversary of the Communist Party's takeover of China. On the mainland, it is celebrated as a holiday called National Day, but in Hong Kong it was met with protests and mourning.

The protests began in June in response to a proposed new law that would have allowed the Chinese government to extradite people accused of crimes from Hong Kong and try them under the mainland's legal system. The protests have since transitioned to focus on other issues associated with Chinese encroachment on Hong Konger's rights, such as the way the Hong Kong legislature is elected, and on the actions of police toward protesters. 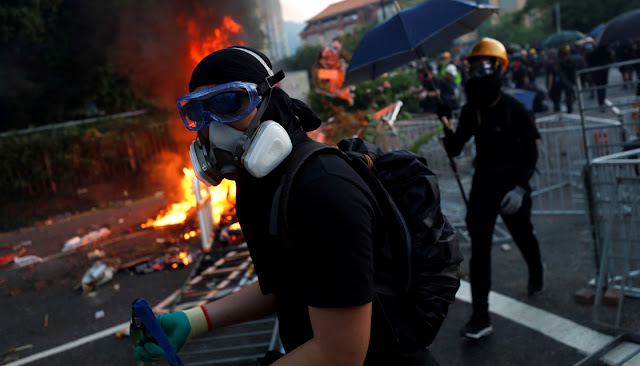