Posted by Sargis on September 20, 2019
The Fairman Rogers Four-in-Hand (originally titled A May Morning in the Park) is an 1879-80 painting by Thomas Eakins. It shows Fairman Rogers driving a coaching party in his four-in-hand carriage through Philadelphia's Fairmount Park. It is thought to be the first painting to examine precisely, through systematic photographic analysis, how horses move.

The Fairman Rogers Four-in-Hand is in the permanent collection of the Philadelphia Museum of Art.

Eakins taught at the Pennsylvania Academy of the Fine Arts, where Rogers was a Board member and chairman of the Committee on Instruction. Rogers recruited Eakins back to the Academy in 1878 and commissioned the painting from his new instructor.

Independently wealthy, Rogers was a civil engineer and retired professor at the University of Pennsylvania. He was an avid coaching enthusiast, founder of the Philadelphia Coaching Club and author of the still-definitive guide to the sport: A Manual of Coaching (Philadelphia: 1900). In the painting, Eakins combined Rogers's love of science with his love of coaching. 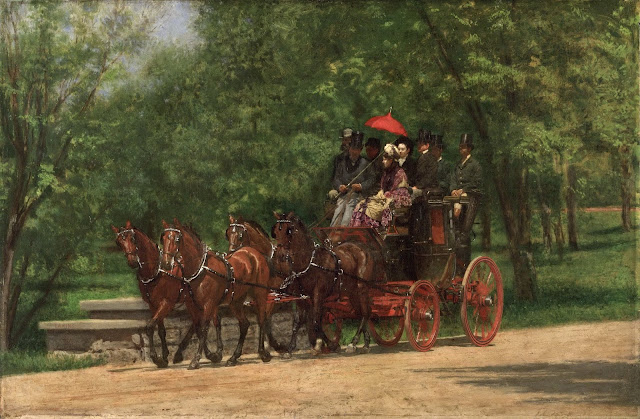