Posted by Sargis on September 15, 2019
Internationales Stadionfest (ISTAF) is an annual track and field athletics meet at the Olympiastadion in Berlin, Germany. It was first organised on 3 July 1921 at the Deutsches Stadion, which was replaced after the 1936 Summer Olympics by the current stadium in 1937. Since 2010 it has been part of the IAAF World Challenge meetings, the second tier of global one day athletics events. Since 2006 it is sponsored by DKB and officially known as the DKB-ISTAF.

On 3 July 1921 the Berliner Sport-Club (BSC), the Sport-Club Charlottenburg (SCC) and the Schwimm-Club Poseidon organised the first sports festival under the current name Internationales Stadionfest. On 23 March 1937 the BSC, the Deutscher Sport-Club (DSC, later Olympischer Sport-Club OSC) and the SCC decided to hold international sports festivals together and organized the first edition at its current place which took place on 1 August 1937. The ISTAF was interrupted in 1940, as well as between 1943 and 1948 (war and post war conditions), in 1950 and 1951, and in 1972 and 1973 (as a result of the Munich massacre during the 1972 Summer Olympics). From 1993 to 1997 IAAF classified the ISTAF among the IAAF Golden Four meetings. From 1998 to 2009 it was part of the IAAF Golden League. When the IAAF Diamond League was introduced, Berlin was provisionally planned as one of its meets, but the organisers were unable to meet the criteria for the new elite series, so the meet became part of the second tier World Challenge circuit from 2010 instead.

The ISTAF returns into the hall the first time since 1968, is the first March 2014 at the O2 World (Berlin) give a big athletics meeting in Berlin again. A week before the World Indoor Championships in the Polish Sopot, the world's elite to measure the ISTAF Indoor in the capital. The highlight of the event is the discus competition with world champion Robert Harting. With a length of 80 meters and a sufficient ceiling height of the discus throw was not a problem even in the modern arena. 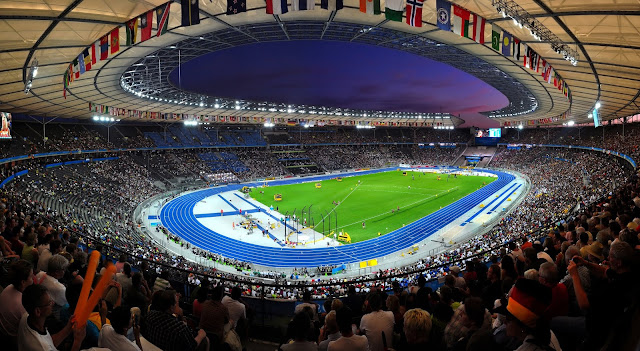