Posted by Sargis on September 22, 2019
The fourth generation Ford Escape made its official debut on April 2, 2019, scheduled to go sale in the third quarter of 2019 as a 2020 model. It will be built at the Louisville Assembly Plant in Louisville, Kentucky. It will also serve as the next generation Ford Kuga for countries outside North America. In China, the fourth generation Escape has a slightly restyled front fascia compared to the North American version, and would be sold alongside the previous generation which was sold as the Ford Kuga.

The newly designed Escape has taken on a sleeker look and appears more aerodynamic, is slightly wider, longer, and lower, and is more than 200 pounds lighter due in part to greater use of high-strength steel. It also has sliding second-row seats for more legroom. There will be four new engine-transmission combinations including a plug-in gas-electric hybrid that can go 30 miles on electricity, as well as a conventional hybrid and two turbocharged engines mated to eight-speed automatic transmission.

The new Escape's base engine, a turbocharged 1.5-liter inline three-cylinder makes 180 horsepower and 177 lb-ft of torque are fully competitive with other base engines in this class, and it can tow up to 2000 pounds. It pairs with an eight-speed automatic transmission with front-wheel drive or optional all-wheel drive. An available turbocharged 2.0-liter four-cylinder engine makes 250 horsepower and 275 lb-ft of torque.

The Escape Hybrid, returning after an extended absence, and all new Plug-in hybrid are powered by a 2.5-liter gasoline inline-four that runs on the more efficient Atkinson cycle, along with two electric motors and a planetary gearset that combines the two power sources and allows for gear-ratio changes, essentially operating as a continuously variable automatic transmission. The standard hybrid's battery pack sits at 1.1 kilowatt-hours, while the plug-in hybrid's is significantly larger, at 14.4 kWh; both are lithium-ion packs that fit under the floor. Combined horsepower for the standard hybrid is 198 horsepower, while the plug-in sits at 209 combined horsepower. The 2020 Ford Escape will have a starting price around $25,000. It will have a S, SE, SEL, and Titanium trim levels. 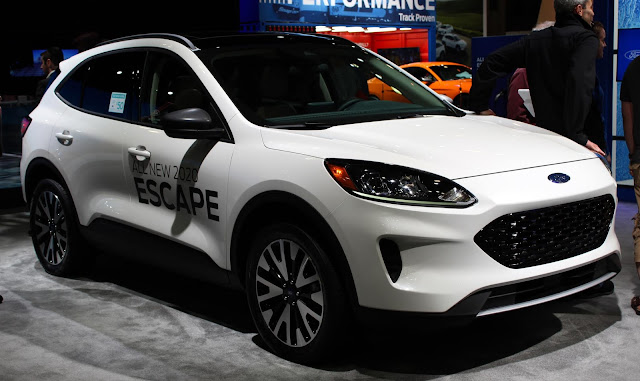