A Simulated view of the VentureStar in low earth orbit. Credit: en:NASA

Posted by Sargis on June 27, 2019
A single-stage-to-orbit (or SSTO) vehicle reaches orbit from the surface of a body without jettisoning hardware, expending only propellants and fluids. The term usually, but not exclusively, refers to reusable vehicles. No Earth-launched SSTO launch vehicles have ever been constructed. To date, orbital launches have been performed by multi-stage rockets, either fully or partially expendable, the Space Shuttle being an example of the latter.

Launch costs for low Earth orbit (LEO) range from $1,400 to $19,000 per kg of payload ($640–$8,500 / pound).[needs update] Reusable SSTO vehicles offer the promise of reduced launch expenses by eliminating recurring costs associated with hardware replacement inherent in expendable launch systems. However, the nonrecurring costs associated with design, development, research and engineering (DDR&E) of reusable SSTO systems are much higher than expendable systems due to the substantial technical challenges of SSTO.

It is considered to be marginally possible to launch a single-stage-to-orbit chemically-fueled spacecraft from Earth. The principal complicating factors for SSTO from Earth are: high orbital velocity of over 7,400 metres per second (27,000 km/h; 17,000 mph); the need to overcome Earth's gravity, especially in the early stages of flight; and flight within Earth's atmosphere, which limits speed in the early stages of flight and influences engine performance.

Notable single stage to orbit research spacecraft include Skylon, the DC-X, the Lockheed Martin X-33, and the Roton SSTO. However, despite showing some promise, none of them has come close to achieving orbit yet due to problems with finding the most efficient propulsion system.

Single-stage-to-orbit is much easier to achieve on extraterrestrial bodies which have weaker gravitational fields and lower atmospheric pressure than Earth, such as the Moon and Mars, and has been achieved from the Moon by both the Apollo program's Lunar Module and several robotic spacecraft of the Soviet Luna program. 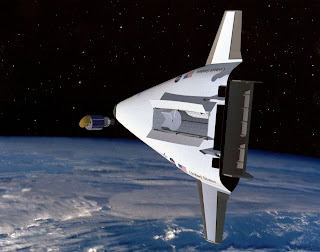