An urban rowhouse with a sense of home

Meg and Glenn Hoburg have spent the past 14 years renovating their three-bedroom rowhouse on Capitol Hill in Washington, D.C. They had a brick wall exposed in the living room, which added warmth and charm and showed its history. They wallpapered the vestibule in a bold blue-and-white print to give personality to the tiny space.

In an old house, there are endless places to spend money. But for the Hoburg family, whose Capitol Hill rowhouse is 117 years old, it's never been about perfection. In the 14 years the family of four have lived in the narrow, three-story house, they have patiently carved out a sense of home -- one exposed brick wall and yard-sale chandelier at a time.

"Living in smaller, older spaces, you have to be creative," said Meg Hoburg, 50, a designer whose specialty is budget-minded jobs. "We did things in stages as we were able to afford them." Her husband, Glenn, 52, a pastor at Grace DC, said he used to dread the word "project," but he's continually mastering the skills needed to keep home improvements moving forward.
"I didn't grow up learning how to fix anything, but Meg had a vision of what the space could become and wasn't afraid to take risks," he said. "Now I can install wallpaper and tile and change out faucets."

The Hoburgs are one of many urban, space-challenged families who love their neighborhoods and will make lifestyle compromises to stay in the city. There's not a bathroom adjoining each bedroom and no massive trophy kitchen in the Hoburgs' 1,500-square-foot home. There are no walk-in closets, though their teeny third upstairs bedroom is the size of one. But by using every inch, doing much of the work themselves, continually coming up with new storage solutions, repurposing furnishings, and constantly condensing and purging their stuff, they found affordable ways to make the house functional and comfortable. 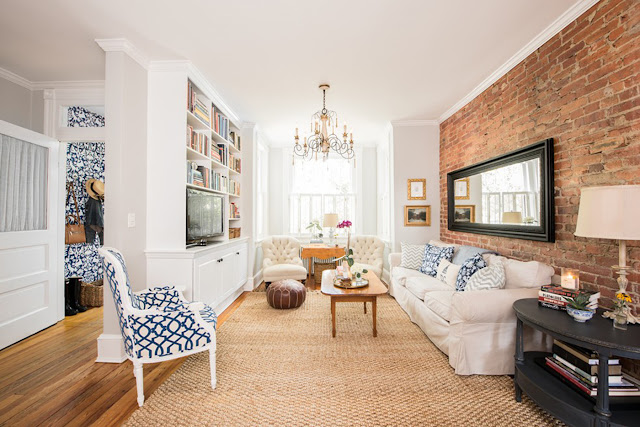