Posted by Sargis on October 17, 2017
The secret to the success of this year’s OFM award winner, as voted for by readers? The finest local produce and gravy that takes a week to make
Ed Cumming
Sunday 15 October 2017 11.00 BST
Over the past three years, A Rule of Tum has spearheaded a culinary renaissance in an area that had hitherto been passed over by the national resurgence of interest in food and drink. With two adjacent restaurants in Hereford and one in Worcester, they were regional runners-up for the Ethical and Cheap Eats prizes last year, and now the company finally has an OFM Awards trophy, for The Bookshop’s splendid Sunday lunches.
“Sunday lunch is one of those meals people look forward to the most, but so often it’s disappointing,” says Dorian Kirk, 29, who founded A Rule of Tum with his brother Edwin, 31, and their friend Jon Stead, whom Edwin met working at the local Pizza Hut.
“Restaurants get away with offering as little as possible: frozen chantenay carrots and peas, veg that’s completely out of season,” adds Dorian. “But it doesn’t take much. Just source good quality meat and organic veg, and make your own gravy. The gravy is the most important thing. If you do it properly it takes all week.” 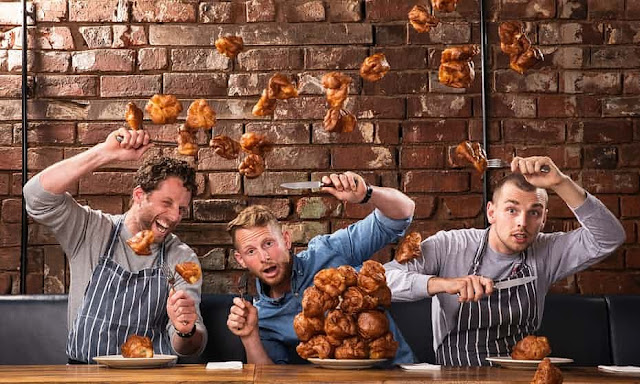